The Festival Tour in Nepal is awesome. Nepal is a country of nonstop festivals. Each and every day there is a festival somewhere. Festivals are an essential part of Nepalese life.

Festivals also offer visitors a valuable opportunity not only for having fun but gaining insight into various aspects of Nepalese tradition. The religious festival follows the lunar calendar while national festivals have fixed dates. Wherever or whenever you arrive in Nepal, make sure that the time for one or more special events.

So If you are planning to discover any kind of festival while you are visiting Nepal, just let us know for the special tour itinerary at the lowest price. Gokyo agency is a leading tour operator that can personalize and customize all kinds of festival tours as per your interest.

Furthermore, find some interesting pieces of information about Nepali festivals as written below in detail;-

Bisket Jatra is a Nepalese new year festival held in Bhaktapur city. The festival begins with the pulling of the chariot of Lord Bhairavnath on the premises of the five-storied Nyatapola temple. Bisket Jatra festival is the biggest festival in Bhaktapur town. Hundreds of locals from either side of the Taumadi begin the Jatra by pulling the three-story pagoda-style chariot. Thousands of people, including foreigners, watch this festival.

According to cultural experts, the tradition of organizing the Bisket festival is thought to have started around 268 Nepal Era prior to the establishment of Bhaktapur town. The Bisket Jatra festival celebrates for eight nights and nine days. 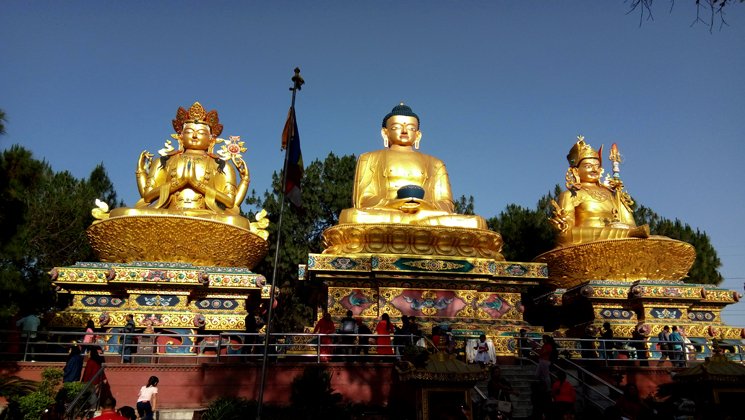 Local speaks as a Buddha Purnima which means the birthday of Buddha. Buddha Jayanti honors Lord Buddha and is one of the most sacred days of the year in Nepal. As per the lunar calendar, the Lord Buddha’s birthday falls on the full moon of the fourth lunar month and is a day of great celebrations. Buddhists from all over the world travel to Kathmandu to attend the festival which includes ceremonies, prayer meetings, and meditation sessions in Buddhist Pilgrimage sites at Boudhnath in Kathmandu. 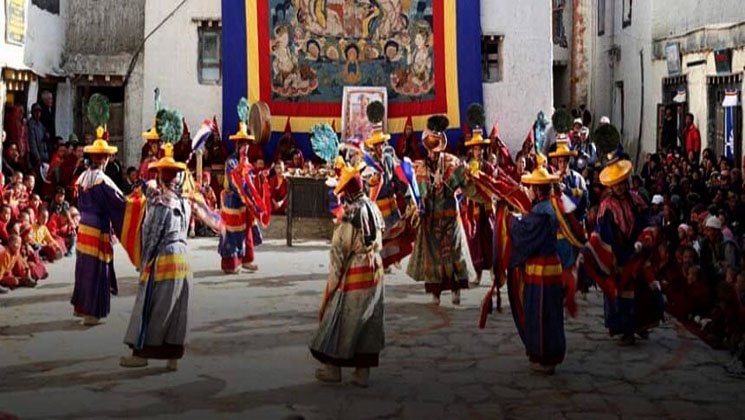 The Mani Rimdu festival performs in the 9th Tibetan month which usually falls in late October. Tengboche Monastery and Thame Monastery are the CenterPoint to celebrate this festival. In the villages, the most important part is when they receive blessings from Rinpoche, and when the monks perform the masked Dance. After this, the whole village gets together and dances until late into the night at Tengboche. These colorful and festive celebrations are the culmination of ten days of prayers on the Buddha of compassion, Chenrezig. The Mani Rimdu festival is done for the benefit of all beings.

4. The Tenchi or Teeji or Tiji festival in Mustang (May / June).

The Tenchi (often pronounced “Teeji”) festival is an annual event indigenous to Lo-Manthang. The name is an abbreviation of the word “Tempa Chirim” which translates as “Prayer for World Peace”. This festival commemorates the victory of Lord Buddha’s incarnation “Dorjee Sonnu” over a demon called Man Tam Ru a vicious creature feeding on human beings and causing storms and droughts. The Tiji Festival usually takes place during the last week of May and lasts for 3 days. Dances were performed by the monks of Lo Manthang’s “choedhe” monastery during the celebration display.

A few decades ago, before the Kathmandu valley became a purely commercial hub. It was agricultural land, which depended upon the rainy monsoon for its important rice crop. Today, though traditional farming practices have reduced, the premonsoon season still sees great worship made to Red Machhendranath-the rain God.

Patan’s streets and palace complexes are made even more evocative by watering lamps and candle lights, women busily cooking feasts, and men gathering strength to pull the chariot of their red deity. As Lord Machhendranath views his followers from the high seat of his chariot, its four wheels representing the powerful Bhairab-receive rice and vermilion powder, the king of serpents asked for a blessing, and his jeweled vest is shown to the public.

Lord Krishna was born at midnight on the eighth day of the dark moon of August. To celebrate the birthday of the Hindu god, devotees flock to the Krishna Mandir in Patan on a preceding day. There, men and women from far away gather around the 17th-century temple and sit in vigil waiting for the midnight hour. Furthermore, euphoric prayers and incantations fill the air, and small oil lamps are lit as a mark of felicitation and devotion to the deity. Lord Krishna’s image is taken around the city in a procession accompanied by joyous crowds of followers and musical bands. 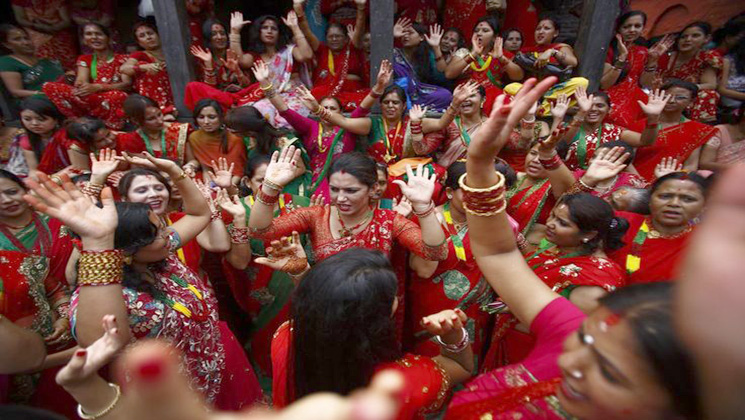 Teej festival celebrate three-day-long in Nepal. Dancing with folk songs, and the red color of women’s wedding sarees dominate the day of Teej, a Hindu festival of womanhood. The day recalls the heavenly occasion when Parbati, daughter of the Himalayas, won the hand of Lord Shiva after severe meditation and fasting. Women’s festival in Nepal is popular as Haritalika Teej. It is a very important festival for Hindu women and it happens in September every year. Married or unmarried both women put on their bridal wear which is a red sari and put on their best makeup to look stunningly beautiful.

On the first day, mothers send gifts of food and sarees to their daughters’ houses, and groups of women gather together to feast. At midnight, the women begin a fast in emulation of Parbati. The second day is for worship, in the early morning of the third day, women in the red flock to the Pashupatinath temple, the great temple of Lord Shiva. The married ones ask for a happy and productive marriage and a long life for their husbands, and those yet to tie the nuptial knot ask for an ideal husband.

The longest Hindu festival in Nepal, is traditionally celebrated for two full weeks. During Dashain, animal sacrifice to Durga the Universal Mother Goddess. Dasain is a time of family reunion, the exchange of gifts and blessings, profuse pujas, ritual bathing, and animal sacrifices. In addition, Dasain honors the goddess Durga, who was created out of the shakti energy of all the gods, armed with weapons from each of them. Goddess Durga, symbolizing valor and prowess, worships and offers animal sacrifices for the devotees’ progress and prosperity.

During the first 10 days, pilgrims throng various river confluences early in the morning and holy shrines in the evening. Ghatasthapana, Phool Pati, Mahaastami, Navami, and Vijaya Dashami are the series of events under Dasain.On Dashami, men and women in their fineries visit their elders to seek tika (a dab of red vermilion mixed with yogurt and rice). Sword precessions (Paayaa) are also held in various parts of the Kathmandu Valley.

The last day is Kojagrat Purnima, which is a full moon day. From this day onwards, Hindu women begin a month-long fast, many in residence at Pashupatinath. New clothes, home visits, grand feasts, kite flying, and village swings are the highlights of Dasain.

Tihar 5 day-long festival of lights, honoring Yama, God of Death. 1st day is to worship a crow informant of Yama. 2nd day is dogs day, a dog is the agent of Yama. 3rd day is the day to worship Laxmi the goddess of wealth. 4th day is self-respect day also a day for draught animals and oxen. 5th day is brother’s day. This festival is a time of lights and tinsel decorations, fancy sweets, and juicy fruits. Roughly 80% of people in Nepal are Hindus and celebrate Dashain and Tihar festivals. In that capacity, the Dashain festival celebrates for 15 days and Tihar celebrates for 5 days. In addition, the importance of celebrating Dashain and Tihar marks reunions, happiness, and the triumph of good over fiendishness.

Sherpas and Tibetans welcome their New Year with feasts, family visits, and dancing. Families put on their finest clothes and jewelry and exchange gifts. Buddhist monks offer prayers for good health and prosperity and perform dances at monasteries. Colorful prayer flags decorate streets and rooftops. And the colors seem especially brilliant at the Bouddha and Swayambhu stupas. Crowds of celebrants at Bouddha bring in the New Year by throwing tsampa (roasted barley flour) into the air. 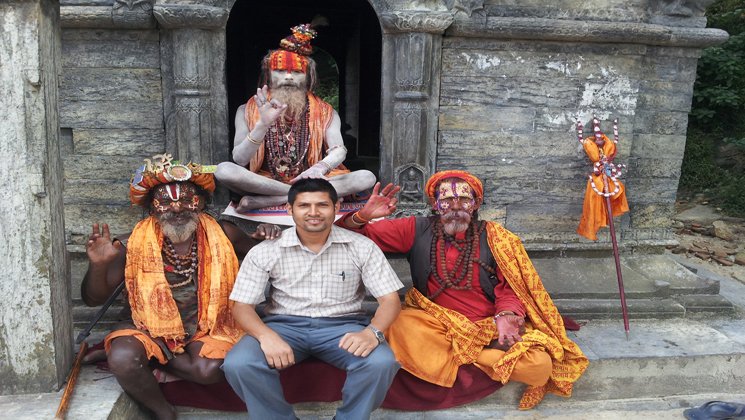 Shiva’s sacred day begins at midnight but devotees don’t really begin to crowd the ghats till sunrise. The populace begins streaming in, past a tremendous variety of sadhus, mendicants of various types and deformities. Devotees performing roadside penances and merchants hawking everything from puja kits to kitchenware. Hindus pay homage to the sacred lingam inside the temple and then bathe, or at least splash a little, in the river.

The family takes part in afternoon rites at Tundikhel parade ground, receiving a 31- gun salute at the end. The King and his entourage pay homage to Shiva in the evening, when the whole tempo of the activity there has picked up, especially the musical side. Hundreds of sadhus reside in attendance camps in the courtyards of the temples situated on the opposite bank, where non-Hindus are also free to watch. The curious can witness some rather interesting yogic demonstrations there. It gets chilly in the evening, but there are usually several fires and lively scenes going at least till midnight when the consecrated time elapses.

Holi festival celebrates the death of the demoness Holika. This wicked woman, who was supposed to be invulnerable to fire, tried many times to kill her nephew, an ardent devotee of Lord Vishnu. In the end, she put the boy on her lap and set a fire beneath them, thinking he would burn up and she would escape. But instead, the boy remained unharmed and Holika, to her surprise, immolated herself.